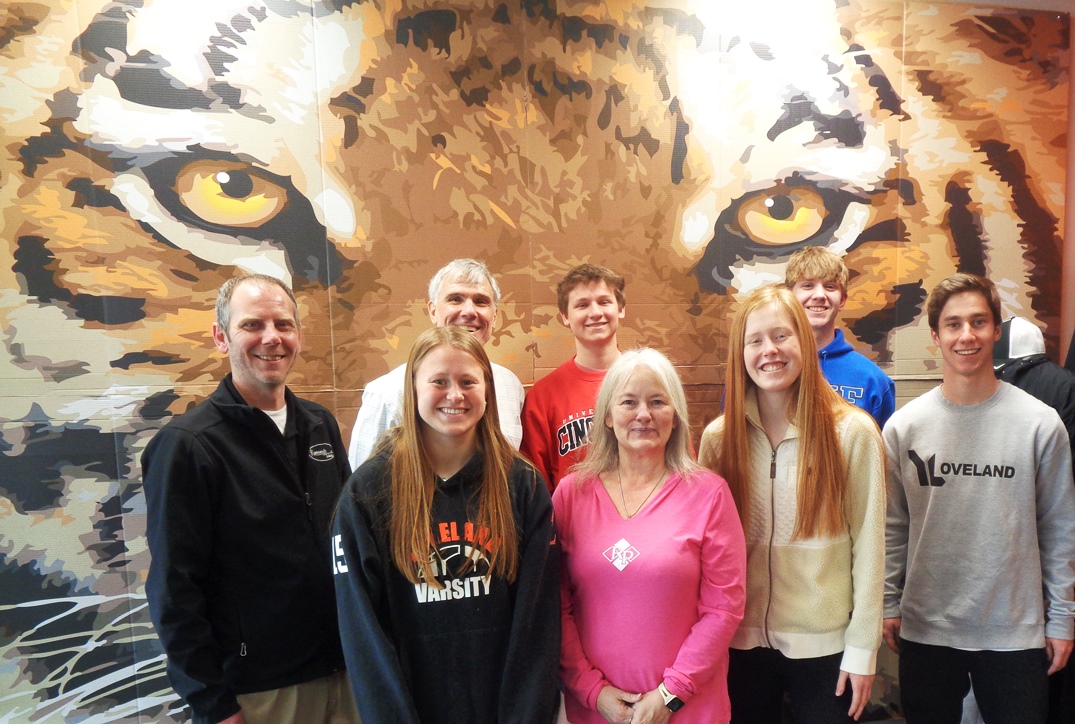 The presentation took place at RP Diamond where Tori Morrison works. Abby Pawlikowski, Luke Griffin, Audrey Planner, Nathan Bayliff, and Matthew Geist from Tigers Inc. joined John Zielke, Ramsey’s and Kevin Egan, Paxton’s during the noon lunch hour to present the donation to benefit the Ben Morrison Foundation. The donation was a result of the Impact Night which took place Friday evening, March 4, with several Loveland businesses participating. Tigers Inc. is a nonprofit organization run by the students who are selected because of their business and leadership orientation. The “Impact Night” was a part of a weeklong effort to support area businesses.

“Impact night is a part of our ‘Back our Business’ week for Tigers Inc,” said Nathan Bayliff, one of the five Tigers Inc. members on hand for the donation presentation. “We pair each business in Loveland with a nonprofit. A portion of their proceeds go toward the nonprofit they are paired with.” 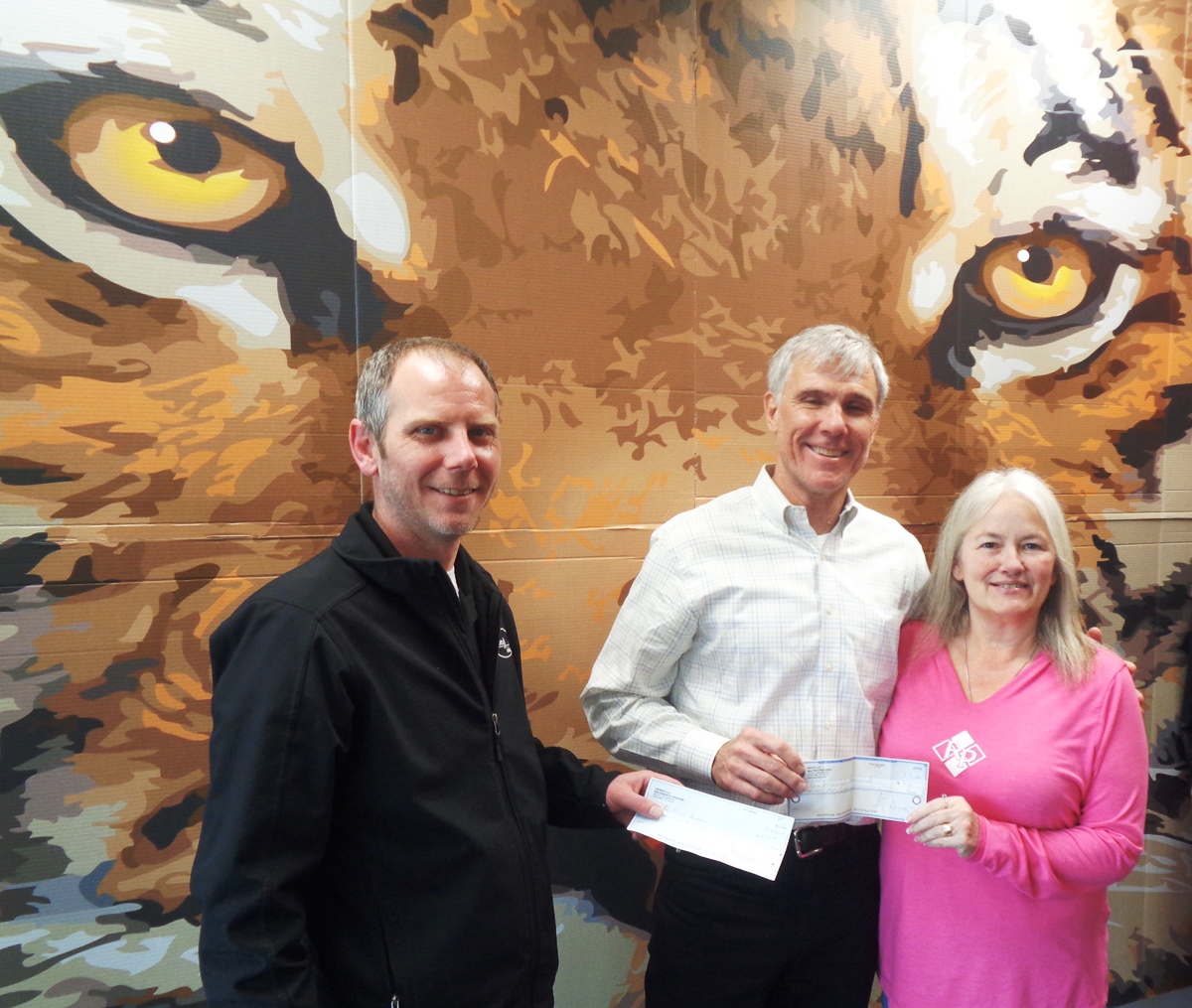 They ask the businesses which nonprofit they would like to benefit by pairing up. Bayliff says he worked closely with Kevin Egan of Paxton’s. They were able to get a few LHS football players and their coach to Paxton’s for a team-bonding event on Impact Night. In this case, Paxton’s and Ramsey’s chose the Ben Morrison Foundation. The foundation was set up in memory of LHS graduate and athlete Ben Morrison following his sudden death in 2021. Funds raised go to scholarships to Loveland students.

“Paxton’s and Ramsey’s gave their donation to the Ben Morrison Foundation,” Bayliff said. “It makes me very proud. When I heard Ben Morrison Foundation was getting this check . . .  we are a nonprofit, so I don’t profit from any of this, but I feel like you do profit with the experience and pride for what you do. I was very thankful and happy to be a part of this.”

John Zielke and Kevin Egan made the formal presentation of the checks to Tori Morrison, Ben’s mother and the driving force behind fundraising efforts for his memorial foundation. In just the first few short months following his death, enough money was raised to award scholarships to Loveland students in the LHS Class of 2021. The $1,410 donation resulting from Impact Night will fund scholarships for LHS students in this upcoming Class of 2022.

“That’s one and a half scholarships,” said Morrison. “That’s how I look at it.”

Morrison was grateful to see the community step up, not just for the Ben Morrison Foundation, but also for all the other businesses and nonprofits who benefitted from the Tigers Inc. Impact Night.

“This community is like no other community, “Morrison said. “They show up, they come out, they support. I don’t even know what the other checks were for the other nonprofits, but if you were downtown on that night, it was crazy busy. That even just warms my heart. I was not expecting anywhere near this amount.”

The support of the Loveland Tiger’s football team packing Paxton’s with their bonding evening during the Impact Night helped make a difference.  It means something to them to support a former Tiger like Ben who played football and lacrosse while a student at Loveland. Their support touches the heart of Tori Morrison.

“Both lacrosse and football have been supportive,” said Morrison. “They’ve been so supportive in keeping his memory alive.” 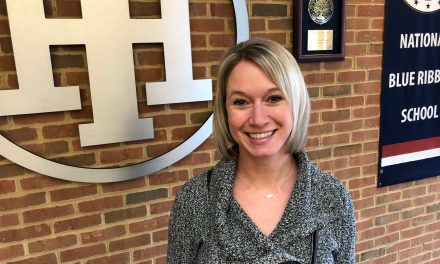 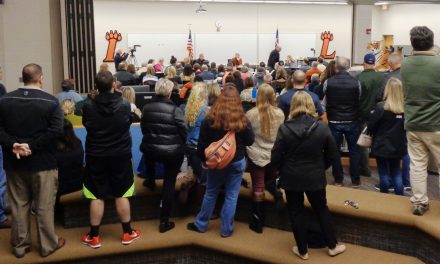 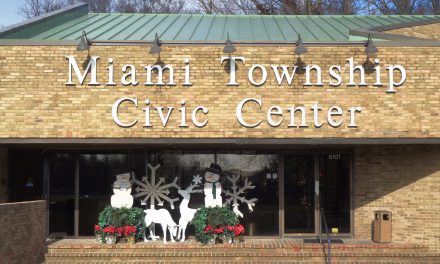