This is the last week for Loveland Police Officer Tim Wilmes 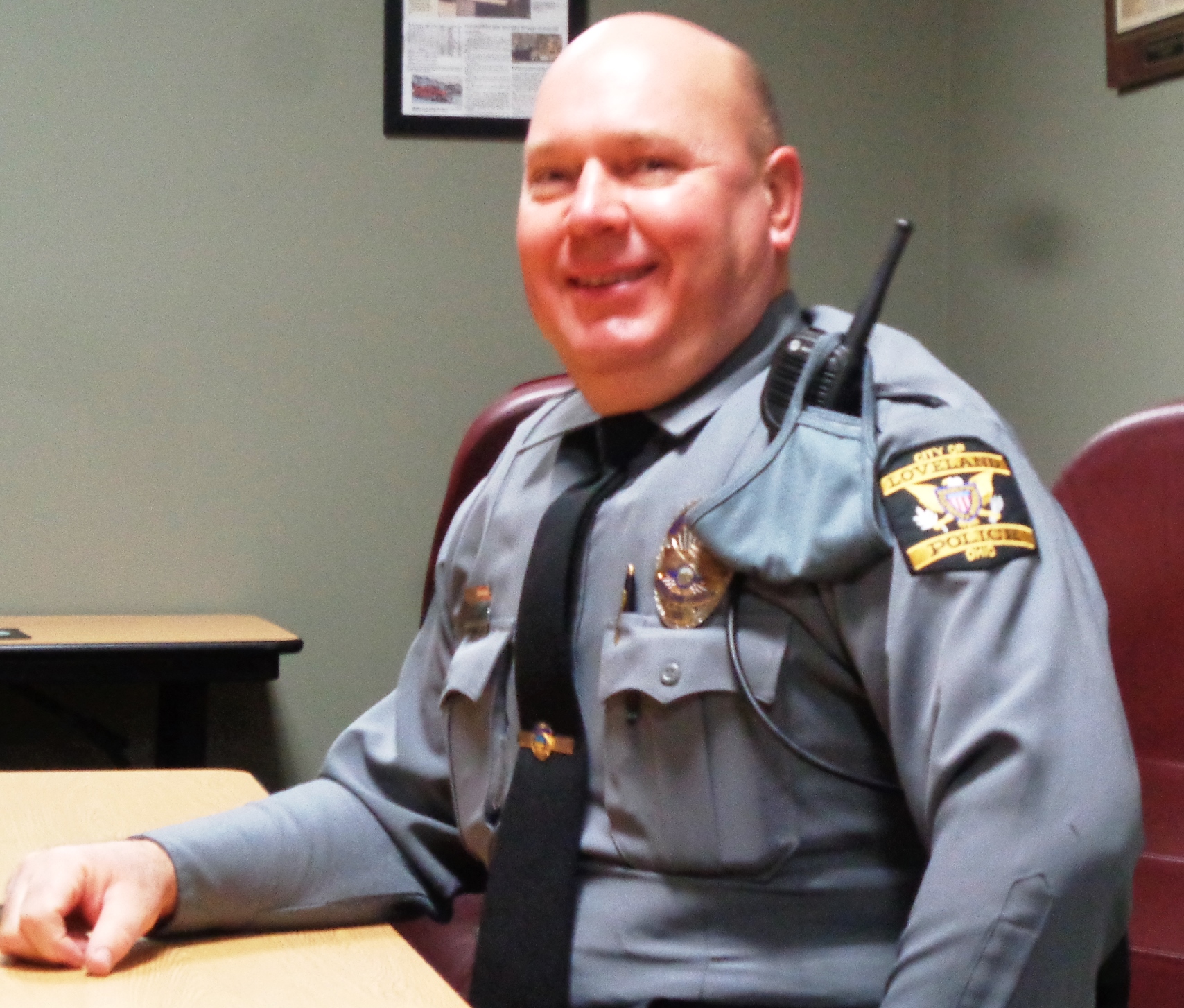 On Thursday, January 14, Officer Wilmes announced his official retirement date at a small informal press conference. He talked about his impending retirement and 31 years serving Loveland. Talking to a group of people –even a small group is outside his comfort zone. Those were pretty much the first words out of his mouth as he announced the coming of his retirement.

“If I say the wrong thing, the most they can do is fire me,” said Officer Wilmes breaking the ice for all. “I’m leaving anyway. February 5th is my last day, 31 years.”

Officer Wilmes took the test to become a police officer in December 1989. He doesn’t remember the exact month, but Loveland put him on part-time in either February or March 1990.

Still, over 30 years serving the people of Loveland Officer Tim Wilmes has done a lot of things. Not only did he serve the citizens, he served his department. For the last 25 years, he has managed the fleet of Loveland police vehicles. In fact, he was set to retire at the end of 2020, but the fleet and the LPD came first.

“I’m a big Christmas person, my yard is crazy,” explained Wilmes. “I always thought of leaving on a high note. My goal was leave at Christmas, but cars came in early. I didn’t want to leave the new guy with not knowing how to do this.”

Chief Rahe agreed to take Officer Wilmes off the road and put him into an administration position on his first exit day January 4. He has been overseeing the outfitting of the three new cars since then; putting equipment in, lights, sirens, lots of pieces. It takes a lot of different vendors and, with COVID it takes longer. He says the whole process takes 6-7 weeks and costs “probably $20K , not including computers. It was former LPD Chief Denny Rees who first assigned Officer Wilmes the task of fleet management all those years ago. It is a job he says required a lot of relationship building and travel.

“I’ve been anywhere from St. Louis, to Grand Rapid and everywhere in between,” said Wilmes. “You go for a week, take these classes, learn a lot. That’s how we’ve kept this program going for all these years. I learned a lot and I love it. 25 years. This is what happens when you complain your car is not working.”

At the mere mention of complaining about his car, Lieutenant Campbell prompted us to ask a question:

“Now ask who’s driving the oldest car in the fleet and who loves his Crown Vic, and if he could take it with him he would,” said Campbell. “He puts everybody else in the new cars.” 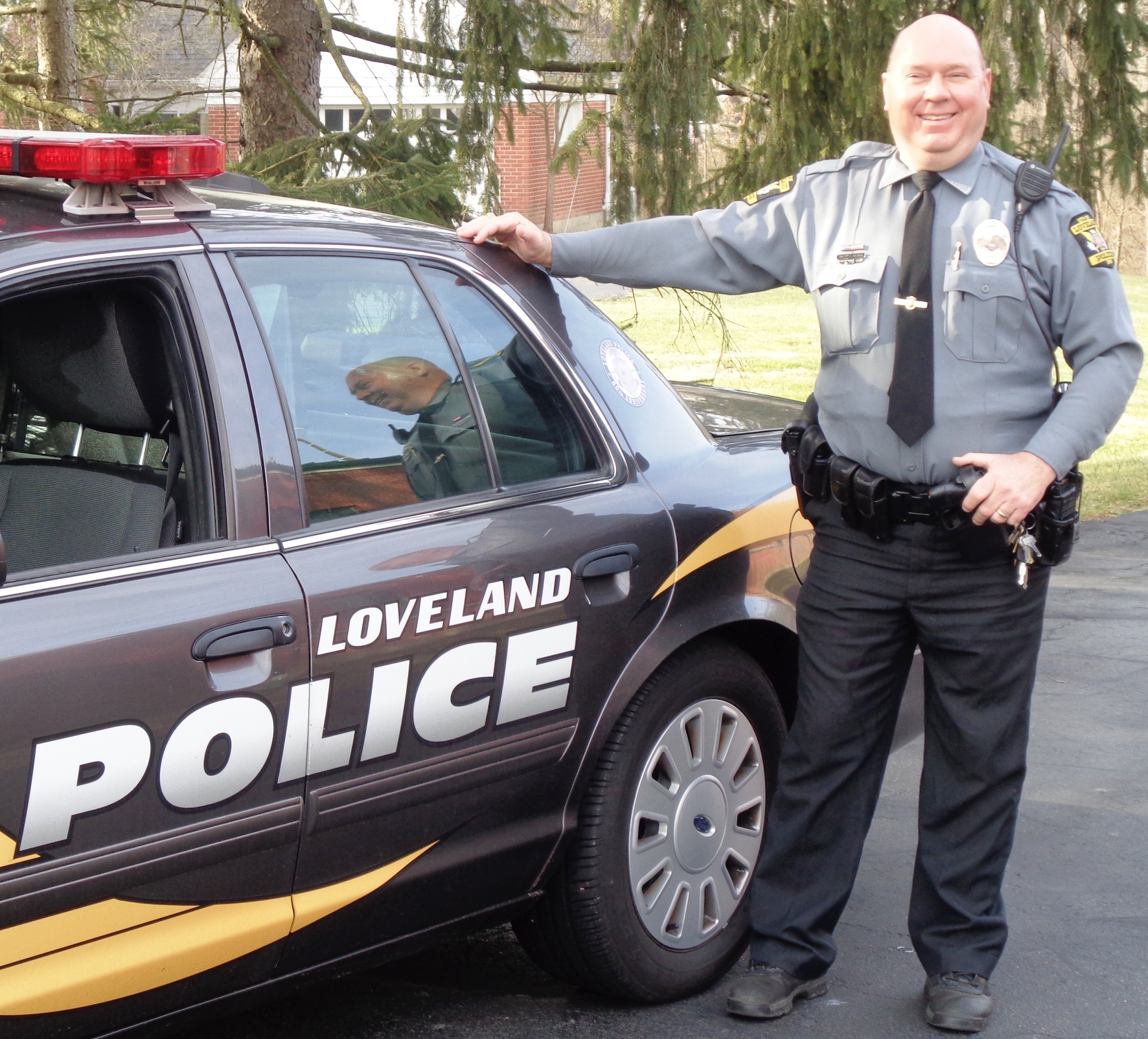 The “Crown Vic” is the old style police car. Loveland only has three remaining in the fleet; one unmarked and two marked. You’ll recognize one as “Tiger 1” which is used assigned to the School Resource Officer (SRO) at Loveland High School. All the kids know Officer Jesse there. Yet, even more familiar is the other “marked” Crown Vic in the fleet. His car joined the fleet in fall 2010 and has served 100,000 miles with Officer Tim Wilmes at the wheel.

“It is the oldest car in the fleet,” Wilmes said. “It’s just fine. I’ve driven everything, but I love that car. It’s unfortunately set to go this year. It’s retiring as well. Everybody knows that car, knows it’s me driving that car.”

Just ask his niece Cindy Wilmes, she confirms the “Crown Vic” stories for her Uncle Tim.

“It won’t be the same without seeing you and your Crown Victoria cruising Loveland,” said Cindy Wilmes, who, aside from his niece, is the 2021 winner of the Loveland Valentine Card Art. “I know you will always seek to protect everyone around you, whether you’re wearing that badge or not. It’s ingrained into who you are, and I love that about you!I am so thankful for you Uncle Tim Wilmes!! You have definitely run the race well. I’m grateful to be your niece and love calling you family.”

In an ironic twist, it is set to be reassigned to St. Columban where Officer Wilmes spent a lot of time over the years. He worked closely with St. Columban School Principal Mrs. Jo Rhoten developing security procedures for the school and St. Columban Church starting out helping with the ALICE training there. (Alert, Lockdown, Inform, Counter, Evacuate) Officer Wilmes made it a point to stop in and visit with the students pretty much daily.

“I sent my kids through St. Columban,” said Wilmes. “I was there a lot. I gotta tell you I had great experiences up there. Mrs. Rhoten and her staff are great. Before we had an SRO up there, I was self-proclaimed SRO. I stopped by all the time to see all the kids – at lunch I could see all the kids in an hour and a half.” 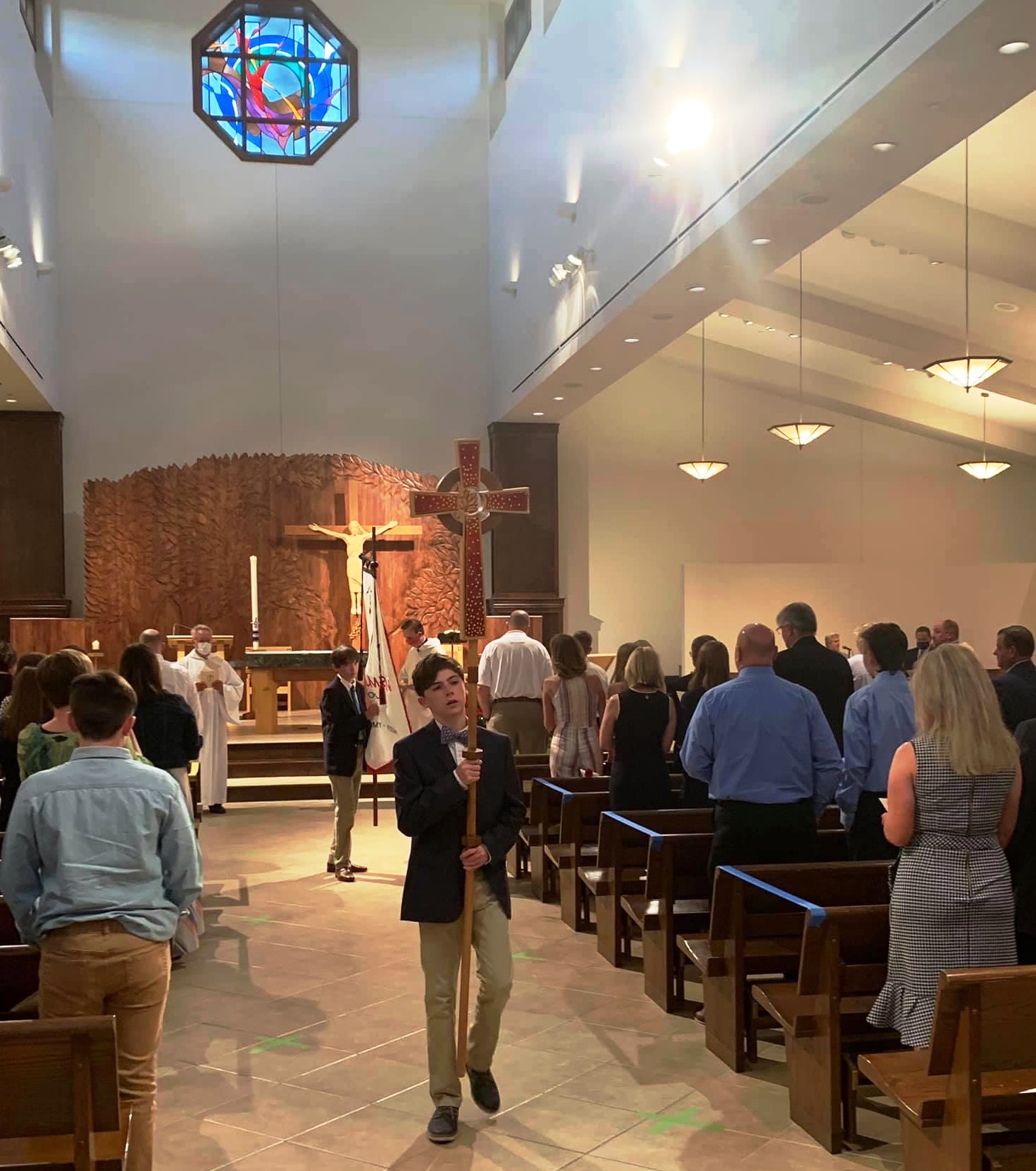 Officer Tim Wilmes served the kids, teachers and school administration. It was way out the comfort zone for this self-admitted “quiet and shy” person. He says putting on the uniform helped him step out of the comfort zone, to “become a different person” and perform a difference-making role for the community, for those students and teachers. He spent 13 years visiting St. Columban School, meeting all the teachers, and serving the kids. It may have started as an assignment to help with ALICE training, but as has always been the case for Officer Tim Wilmes, he found more ways to improve things.

“It was a great deal,” said Wilmes. “We made a lot of enhancements. “When Steiny (Officer Jake Steinkoenig) got there, it was just a different face. They were already used to seeing a cop car and a cop in school.”

“Congratulations,” Tammi Johnson commented. “Thank you for your service to the Loveland Community. Best of luck in your retirement.”

Officer Wilmes has three children – all in high school. His only daughter is the oldest and currently a senior in high school. He has two boys, a sophomore and a freshman. While his daughter is headed to college next year, she remains undecided on a major, but has expressed interest in public service of some kind. His oldest son is already working in the cadet program with the Milford Fire Department and plans to attend Scarlet Oaks fire service his last two years of high school. His youngest son appears to be following in Dad’s law enforcement footsteps. He is already working in the Miami Township Police cadet program.

“It’s a blast being a dad,” Wilmes said. “I shouldn’t have waited so long.”

As he tells the story, his wife gave him the marriage ultimatum after five years of dating. Wilmes says they were friends for five years while he was “trying to get my career together.”

“The joke is our first date was our honeymoon,” he said.

No joke, Wilmes is quick to say how much he loves his wife. Apparently he got his career together too. 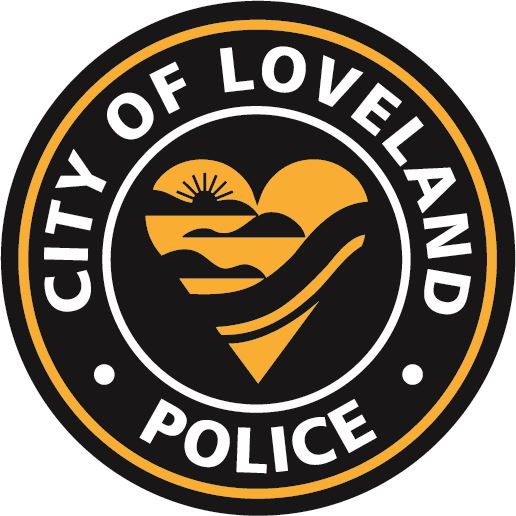 “I gotta tell ya, it’s been an awesome job,” said Wilmes. “Very few people can actually say they did their dream job.”

His dream job right in the community where he grew up and continues to live. That did not go unnoticed by Loveland Police Chief Sean Rahe.

“It’s not very often someone gets to be born, grow up, go to school, and work 31 years in their hometown,” Chief Rahe noted. “Tim Wilmes has given so much to the Loveland community and the LPD Family. His service represents what we all know to be true. Loveland is a very special place and a wonderful community.”

Lt. Campbell echoed the message of Officer Wilmes’ giving; going as far to say he still has a lot to give. Giving all he had to protect and serve has always been his goal.

“I can honestly say I’ve done everything I can for the people I’ve served,” Wilmes said. “You see good and you see bad, but being a police officer is great.”

Officer Wilmes wanted to be a police officer since he was just a young boy “pulling over kids on bikes” on Brandenburg.

“Great job, Tim,” said Suzanne Vaughan. “He was one of my students!”

While a student, Tim Wilmes worked at the old Marathon gas station on Loveland-Madeira Road through high school and college. His boss there was his biggest supporter scheduling him around his classes.  He even drove back from  Eastern Kentucky University, to work Thursday night, Friday, Saturday and Sunday then drive back to EKU for in time for Monday morning classes.

“I had great support from that guy,” Wilmes said. “That’s how I got my degree. If it wasn’t for him, I wouldn’t have got my piece of paper. I just think the world of him. But yeah, I’ve been here ever since.”

Officer Wilmes announced his retirement and the community responded. The City of Loveland put out a press release. Loveland Beacon wrote a story and shared the news on social media platforms in Loveland. Here’s what the people said about this man who has served his hometown family, friends and community for 31 years:

“Congratulations Officer Wilmes!! Thank you for all you have done for the folks of Loveland and this town over the last 31 years!!! Enjoy your retirement and time so deserved with your family!!!” –Shawn Osborne Ealy.

“Thank You for protecting our Loveland..Congratulations.” – Emily Sowder 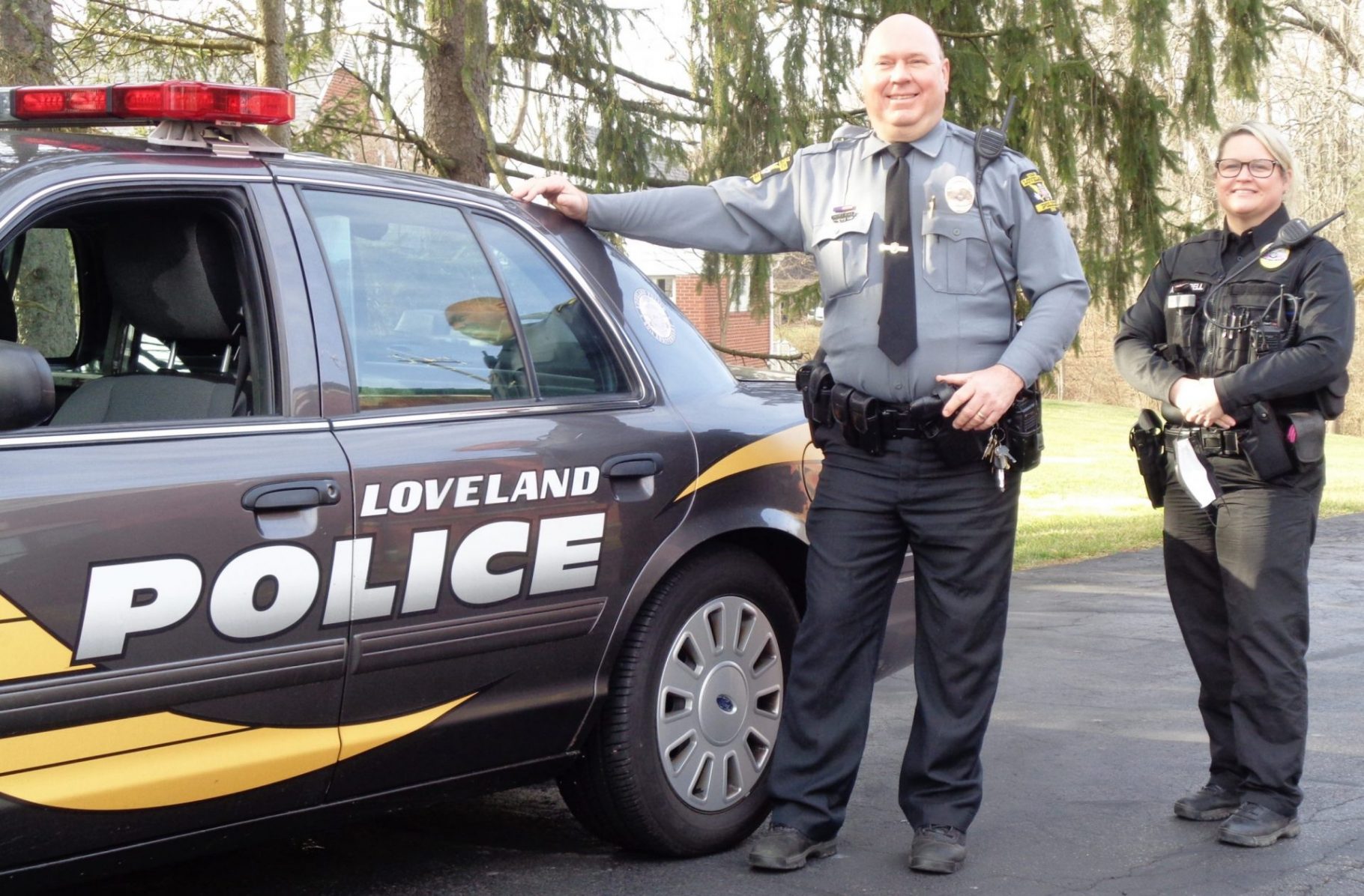 His partner of the last three years, Lt. Amy Campbell says Wilmes is always giving. What does his retirement mean to her?

“It’s going to be quiet,” Lt. Campbell said with a hearty laugh. “We’ll still do lunch. We’ll still talk. Tim is not going away. That’s the thing. Tim is not going away. He’s a Loveland fixture. If he were to test out Florida or somewhere else, he’s still going to be here. He’s homegrown. He’s going to stay here. I have no doubt he’s going to end up doing something in the area, around the area. He loves it too much. He’s not leaving; he’s saying kind of a see ya later.”

Officer Wilmes practically echoed the words of his partner admitting the challenge of moving on. It was a challenge Lt. Amy Campbell helped him through.

Well wishes have poured in from throughout the community.

Wilmes acknowledged his love for the city and her people.

“I’ve been blessed to work in the town where I grew up,” he said. “It’s hard to walk away. Few people can say they did their dream job in the town they love.”

An old friend and former Loveland City Councilman responded to that quote from Tim.

Officer Tim Wilmes made all of Loveland his family, but Loveland was also home to members of his family. Risk came with the job. There were so many near misses, but for the first time it has hit him “like a ton of bricks” that he’s okay. In the end, the question became is the risk worth it.

“I don’t do risky things for a reason,” said Wilmes. “I have a family. I want to take care of them. Even though I love being an officer, it just wasn’t worth the risk anymore.”

But it was worth getting to know all the people and earning their gratitude for a job well done.

Brian Hollingsworth can say it for all of us. “Thanks for everything Tim,” he said. “Congratulations!” 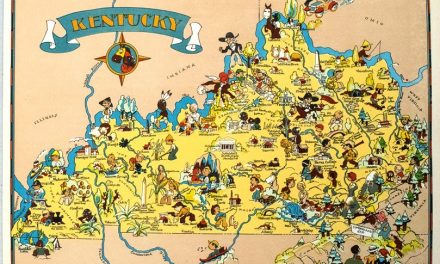 Bringing Kentucky into the Union in 1792 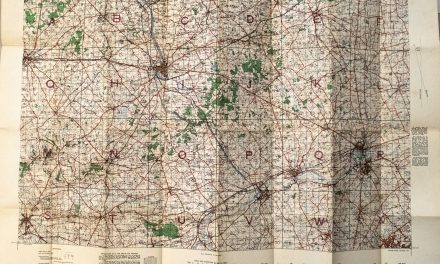 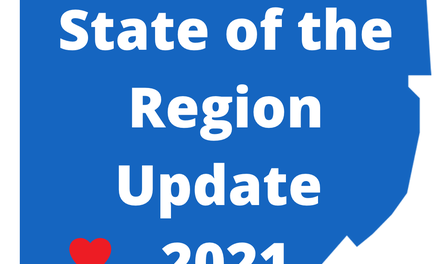 2021 State of the Region Address scheduled