Gives new meaning to: “take a seat on the bench”

CLERMONT COUNTY, OH (October 14, 2022) – A reliable place to sit and relax can be a blessing. Thanks to a Clermont Northeastern High school senior, members of the school’s music program now have six such spots. 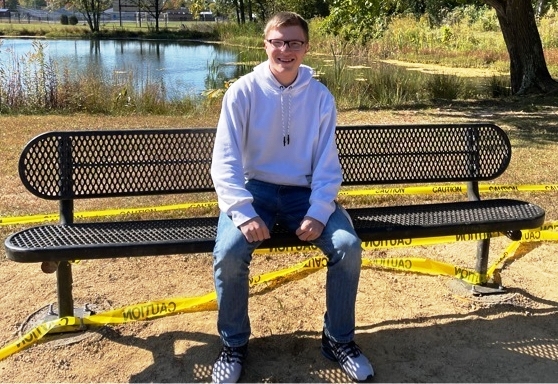 Clermont Northeastern senior Bryce Pillman sits on one of the metal benches he installed on the school campus as part of his Eagle Scout service project. (Photo courtesy CNE Schools.)

Bryce Pillman, a band member, installed six benches near the group’s practice area, behind the elementary school, bordering the pond and nature preserve. He did so as part of his Eagle Scout project, for which candidates plan and implement a service project that demonstrates leadership and commitment to duty. Pillman asked band director Chris Moore for ideas, and Moore suggested improvements to the practice area.

“A number of years ago, we moved the band practice field behind the elementary school,” Moore said. “I had a band family build an observation tower. We used to have some old wooden bleachers over there that eventually rotted out. Bryce came to me and said he wanted to fix the band practice field. I had acquired some bench pieces and he got the rest of the project together.”

The scope of the project grew over time.

“Originally, I was going to be building one bench … wooden bleachers more than a bench and it was just going to be an assembled bench.” – Bryce Pillman, CNE senior, CNE Band member and Eagle Scout candidate.

Moore also asked for survey markers, to be used as guides for lining the field.

Planning began in March 2021. Everything was proceeding in order until Moore approached Pillman one day during class and said he had six metal benches. “So he gave me those and it just went from there,” Pillman said.

Benches were installed earlier this month; 12 to 15 people helped during the build day, Pillman said. His role was more as a project manager, “carrying out your vision of what you want,” as he described it. 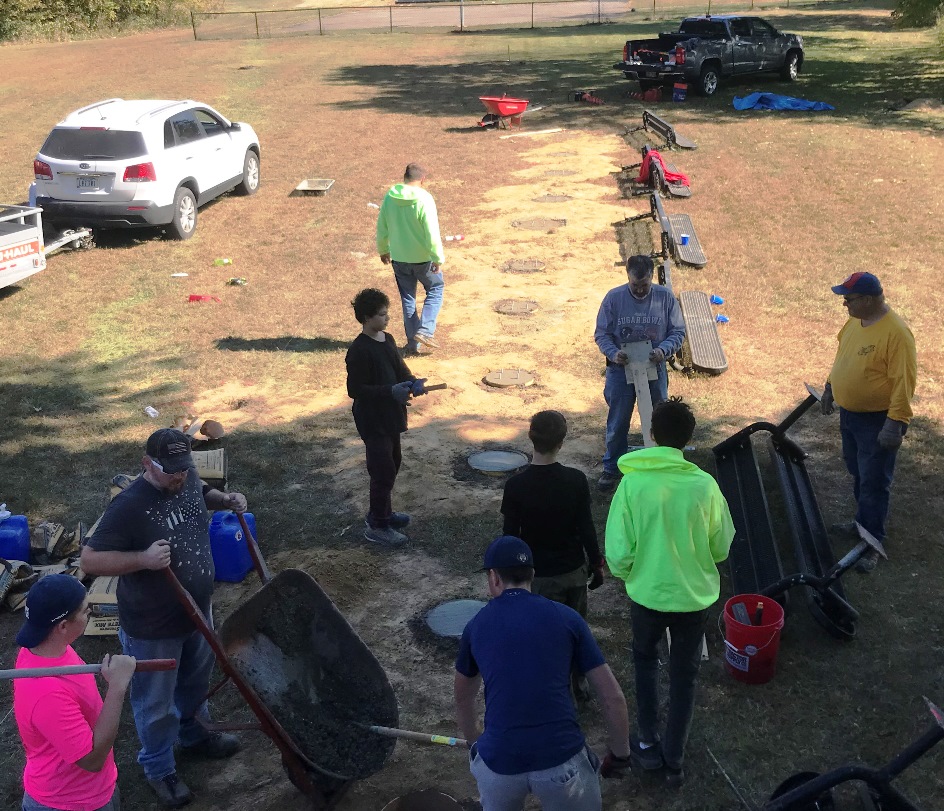 The work itself was fairly routine. Pillman’s crew dug holes about two feet deep and 16 centimeters wide, placed a solid tube in each one, filled the holes with concrete and put a couple of L-shaped anchor bolts to stabilize the benches. Pillman said he learned “on the fly” by reading articles and watching online videos. His next step is writing an overview of the work, which had to be completed and submitted by Oct. 20, Pillman’s 18th birthday.

A Milford resident, Pillman hopes to attend college – Ohio University is his preference – and major in meteorology, with a goal of working behind the scenes in that field.

“I won’t be mad about being on TV, but I’d prefer being on the sidelines, because I’m a more reserved person, so I don’t think TV would be for me,” he said. “But I’ve been told I have the TV personality, or at least the weather and TV personality.”

Ohio, incidentally, is the alma mater of Moore, and a regular stop on CNE band’s performance itinerary, which includes semi-annual visits to DisneyWorld and appearances in the Cincinnati Reds Opening Day parade and at Cincinnati’s BLINK event in 2019. 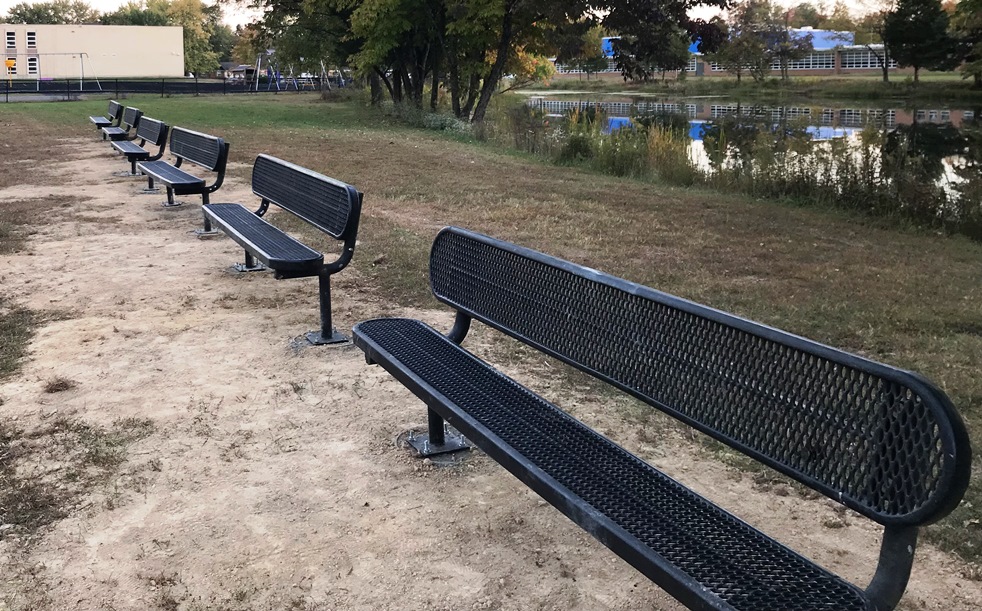 The six benches installed by Clermont Northeastern High School senior Bryce Pillman and others, behind the elementary school and next to the pond (the high school is in the background, at right). (Photo courtesy Bryce Pillman.)

Pillman, who is also a member of the school’s Link Crew and e-sports team, likes being in band because of the overall atmosphere.

“I just think it’s a really fun program, especially our band because I like that it’s a little bit more, I wouldn’t say casual, but we don’t do competitions,” Pillman said. “It’s easy to get into, but if you really put the time to get into it, it can be the best thing in the world.”

The benches were his way of contributing more than music to the program.

“It’s meant for the marching band, so they can practice a lot easier, just make their life easier and have a nice comfortable place to sit and not (on) the ground,” said Pillman.

“It’s great to have a spot for a kid to rest when they aren’t feeling well,” Moore concluded. 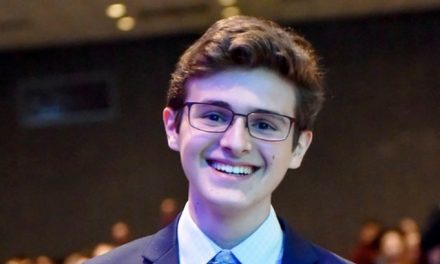 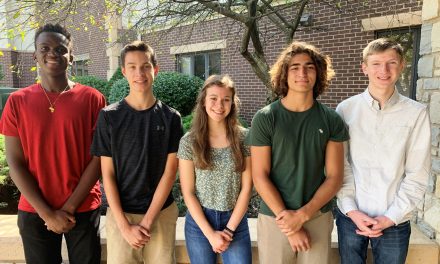 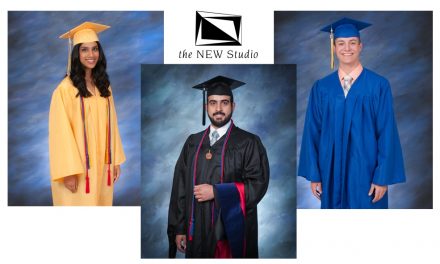 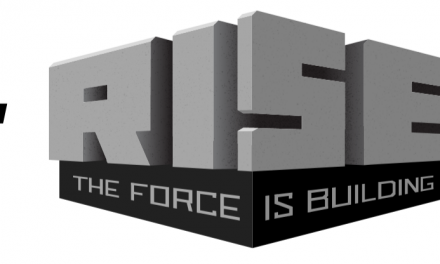