LOVELAND, OH (May 16, 2021)  – Loveland-Symmes firefighter Mike Books discovered the deteriorating remnants of the historic WWII monument while at an estate sale in 2018. 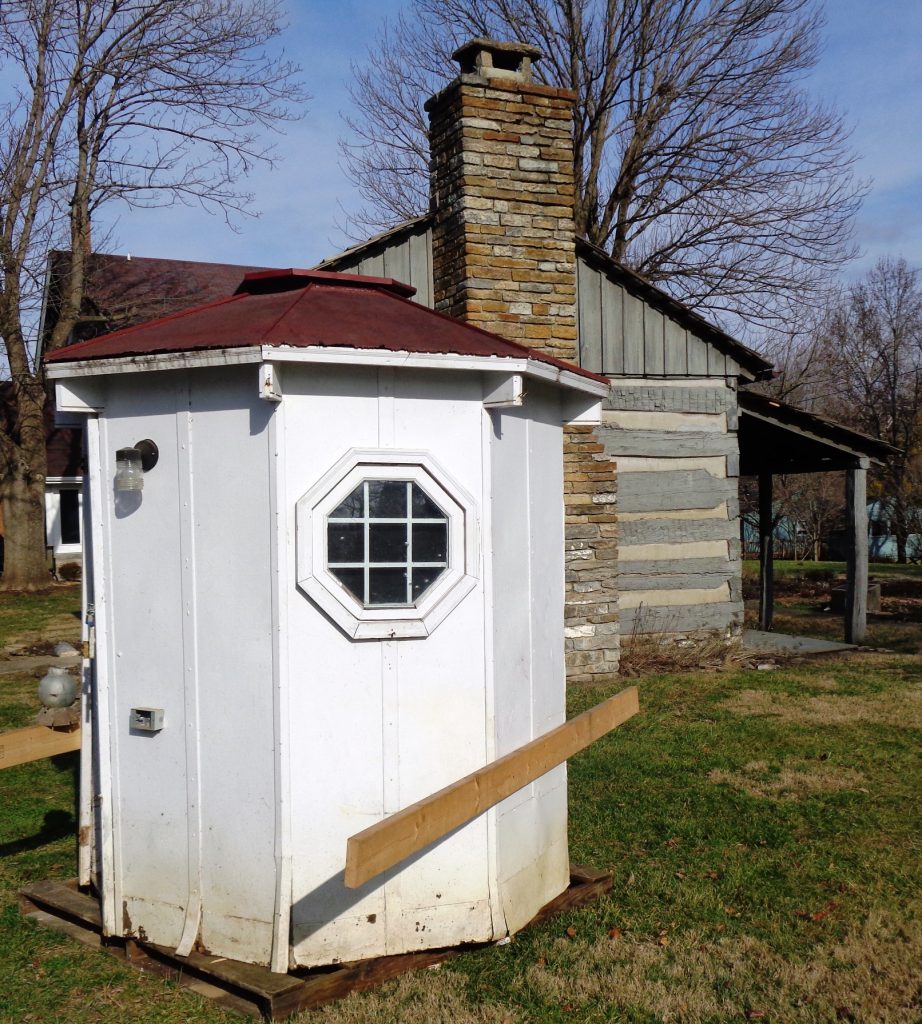 This is the “Kiosk” WWII Honor Roll monument on January 13, 2020 pretty much as Mike Books found it in November 201 (Photo Chuck Gibson)

Books wasn’t sure about what he was seeing on the estate of Kenneth Joseph Moore, but suspected he may have found the Loveland WWII Honor Roll Monument. He made a call to Jim Grethel, current President of Loveland Museum Center. (LMC)

“Mike Books, of Loveland-Symmes Fire Department went to an estate sale on S.R. 48, and he reached out to me and said I think this is the old honor roll,” said Grethel. “So, I couldn’t get in my car fast enough. Sure enough, we determined pretty quickly that was it.”

They spoke to Chris Moore of the estate and he said he would donate it to the Loveland Museum Center. It took about a month to organize transportation of the monument. In the meantime, Grethel and Books went back to check on it several times and found something surprising each time.

“Every time Mike Books and I would go back, a different piece of it would show up,” Grethel said. “Someone was dropping them off. All those panels up there (at the top of the restored monument) with the different branches of service; someone would bring another one, bring another one and finally someone brought what was left of the eagle.”

The eagle had been badly damaged by what appeared to be gunshots leaving only the claws. They did have all the original military branch insignias with the exception of the Medical Corps. Transportation was arranged on a flatbed truck provided by Jason Wright Landscaping November 11, 2018. Kevin Malof allowed them to store it in the old Bond Furniture Warehouse on Karl Brown Way. Eventually that old warehouse was to become Rodi, the new Italian Restaurant which recently opened. 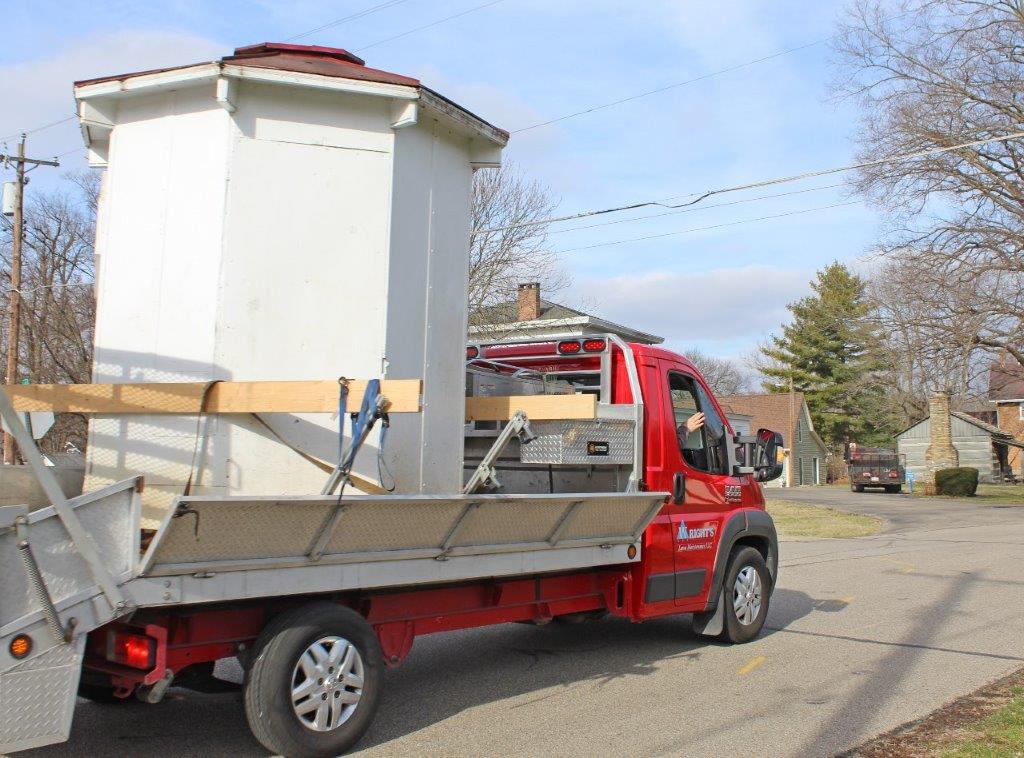 The Kiosk made its way through Loveland by truck on January 13, 2020 finallly landing on the Loveland Museum Center grounds (Photo: Provided)

“I reached out to Kevin, and he said we could put it in that warehouse,” Grethel explained. “Then work started on Rodi, so we had to move it again.”

That’s when, on January 13, 2020, they loaded it up and moved it to the museum grounds. Nobody knew it then, but just two months later we all found ourselves in the midst of the COVID-19 pandemic shutdown. The monument just sat there. Nothing happened until late spring, or early summer. The plan was for all the restoration to be completed during 2020.

“We were going to dedicate it on Veterans Day,” said Grethel. “The pandemic hit. That changed all of that.”

Once the pandemic limitations were sorted out, Grethel says a crew of key people came together to do the restoration work. As if the pandemic restrictions weren’t challenge enough, some of the “pieces” of the monument presented some challenges of their own.

“A couple things that were a challenge; the eagle, the emblems, the sentence that goes around and the names,” Grethel pointed out. “Basically, the graphics of it were our biggest fear. We went through every kind of option you could imagine for these names.” 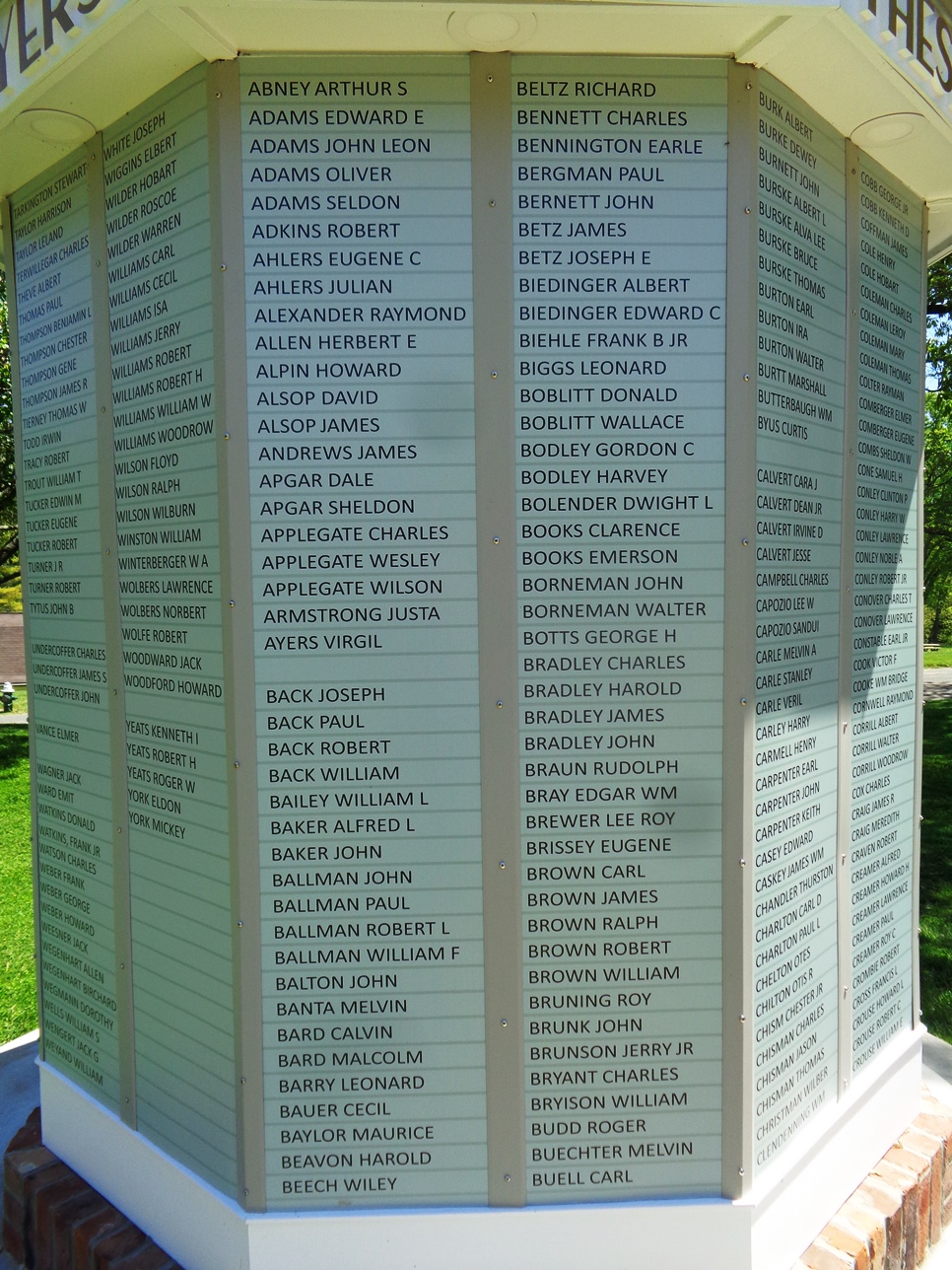 The option they chose for the names was vinyl wrap done by Brad Marx of Cincy Vinyl Wraps in Milford. They were able to work quickly getting the name panels done in three days once they had the list. They were chosen for their durability.

“Down the road, if a storm damaged it or anything happened, we can get them remade really quick and relatively affordably,” said Grethel. “That is important to us, especially if we had any misspellings. We’re about 99-percent sure, but we know there might be a few.”

Grethel cited the example of several names which had two first names like James Howard which they found out was supposed to be Howard James, but was reversed. It was important to them to get those names right because the men and women are being recognized as Loveland citizens who served our country during WWII. It was a daunting task determining the over 400 names now recognized on the restored historic Honor Roll Monument.

“Considering how relatively small Loveland was in 1944, it gives you some idea what a big deal World War II was,” Grethel noted. “Even this many people in Loveland today, it would be unbelievable.”

It is unbelievable to understand the process Grethel and the others went through to identify the names to restore the original honor roll. They thought they had a city document which listed them all, but that turned out to be inaccurate. Pouring over old photos turned out to be the most reliable source. Even then, some names were too faded to make out. That’s the reason you’ll see some single names like “Hill W” or just plain “Hines” apparently no first name they could make out. Grethel credits John Hill Construction supervisor Bill Bryant, himself a veteran paratrooper for supervising work on the restoration. That connection also led to the John Hill helping to fill in a missing name of one of his own relatives – “Vincent Hill” – on the monument.

“They are all World War II,” said Grethel. “It’s a World War II Honor Roll Monument, not a memorial. I’m sure undoubtedly some of them lost their lives, but it’s an honor roll.”

Not every city did it. Most cities that had the honor roll, or something like it during World War II had it on a side wall of a building or a flat stand-alone wall type monument. Most were very tight-knit communities similar to Loveland 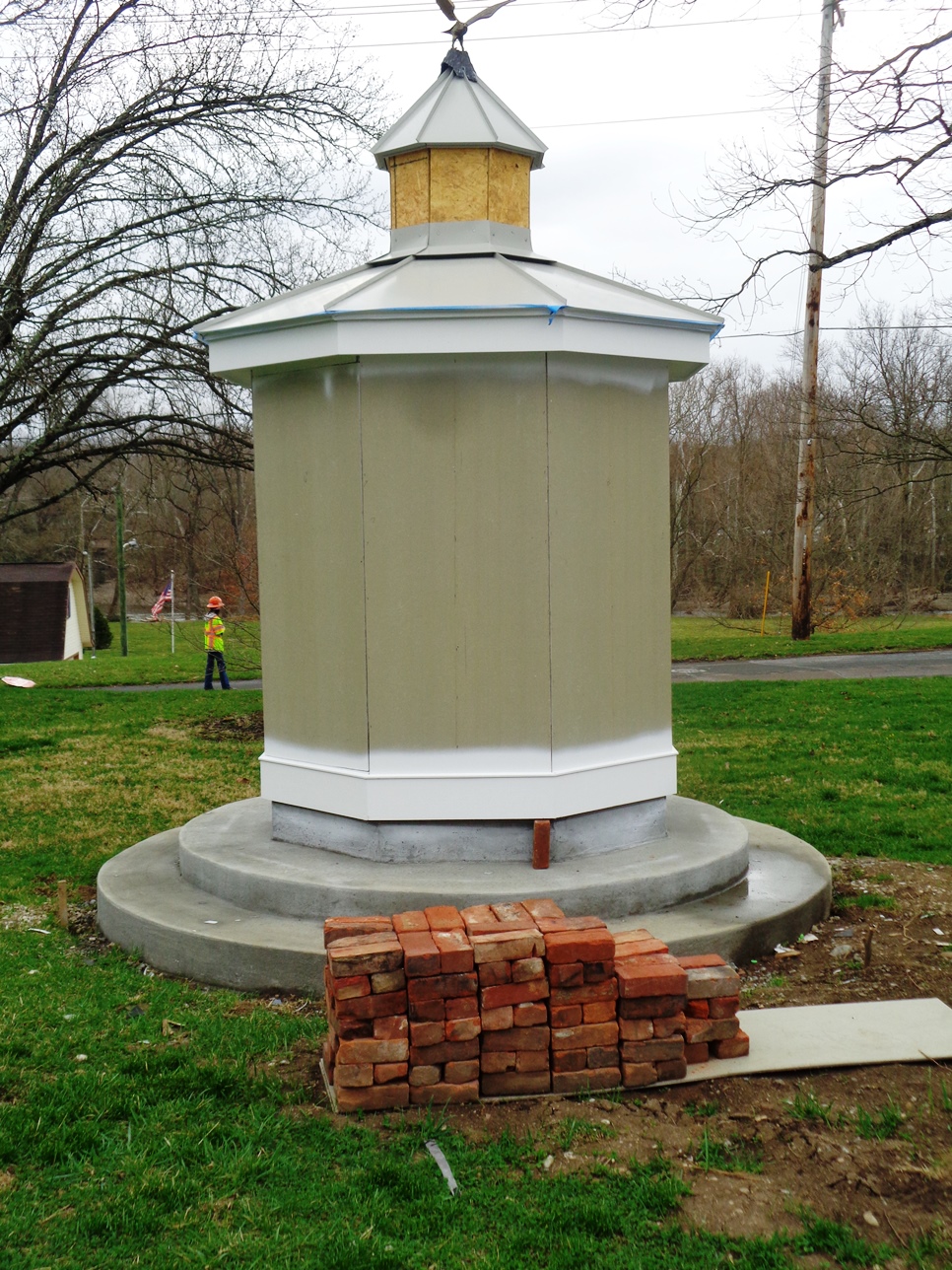 Still in the process of restoration after being rediscovered at an estate sale, the WWII Honore Roll monument as recently as March 24, 2021 (Chuck Gibson)

“Different cities across the country are discovering these in storage and elsewhere,” Grethel explained. “Ours is unique because A) it was designed by an artist, Carl Zimmerman. An artist of some note I might add. And then, it’s also unique because of its shape. The only one remotely similar to this one was up in Rochester, NY – that we could find.”

Grethel says different cities did it different ways. Today, as we draw near the Memorial Day Celebration in the City of Loveland, Ohio, the Loveland Museum Center has completed restoration of the historic World War II Honor Roll monument designed by artist Carl Zimmerman – in fact a Cincinnati artist well known for his mural and oil painting. The completed monument has the original unique octagonal shape, like a gazebo, with each panel featuring names, some very historic Loveland family names serving in WWII, roof panels featuring the emblems from each of the different U.S. Military service branches and a message of honor winding all the way around. It says: “We Honor These Who Serve For God & Country In All Our Thoughts & Prayers” 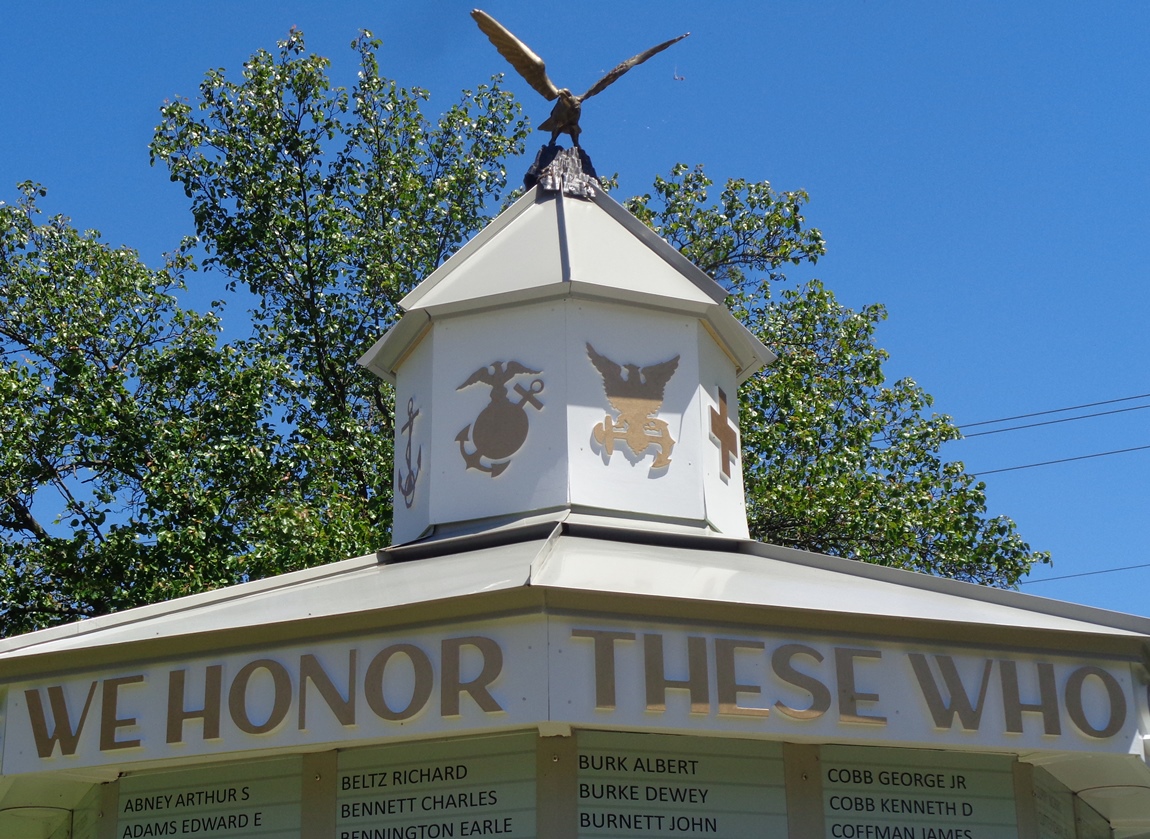 “We had a big whopping five photos,” said Grethel. “It was a matter of getting them on the computer, zooming them in and trying to get the names correct.”

The restoration of this treasured piece of Loveland history could not have happened without the help of several people and organizations within the community. Grethel cited especially the donation of the monument itself from Chirs Moore of the Kenneth Joseph Moore estate, along with John Hill Construction, Loveland Legacy, Loveland-Symmes Fire Department and especially Mike Books for making the find in the first place, the Heritage Advisory Council and Friends of the Museum Center. A lot has been said about the military branch insignias/emblems as a key part of the restoration. Steve Mining gets credit for crafting those and the message of honor sentence which wraps around the base of the roof cap on the Honor Roll Monument.  Credit for the final finish gold painting of the military branch emblems belongs to Kim Grethel who could be simply called current “First Lady” as wife of LMC President Jim Grethel.

“Interestingly enough, John Mercer, a veteran with the Air Force saw specks of gold in the original branch insignias,” explained Grethel. “We had them for weeks, years, and never noticed it. Once we really got in close and looked, we saw the gold paint and we knew the emblems were in gold. We really wanted to return it to what it originally was; a World War II Honor Roll.” 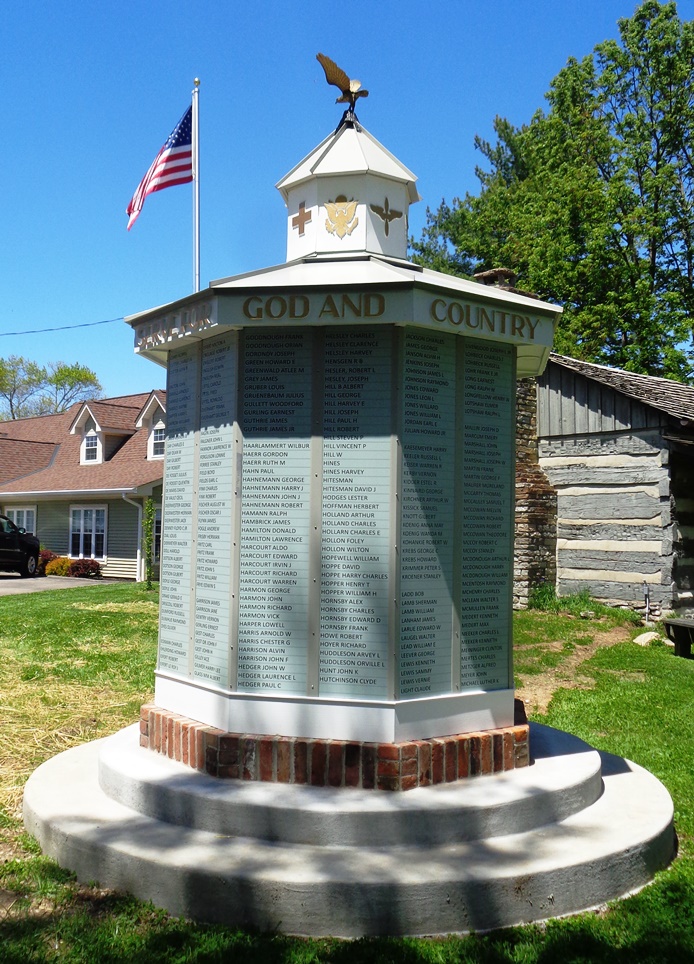 You can see for yourself when they have the formal dedication ceremony this Memorial Day on the grounds of the Loveland Museum Center.

“I’m just glad we could do it,” Grethel said. “For anyone from Loveland to be able to see their family names that served in World War II up there is really kind of nice. Our main goal is to preserve and maintain Loveland’s history.”

The Dedication will follow the City of Loveland Memorial Day Parade which ends with a ceremony at Veterans Memorial Park on West Loveland Avenue at Riverside Dr. a short walk from the Museum Center just up Riverside Drive. 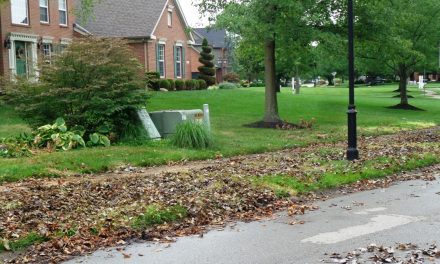 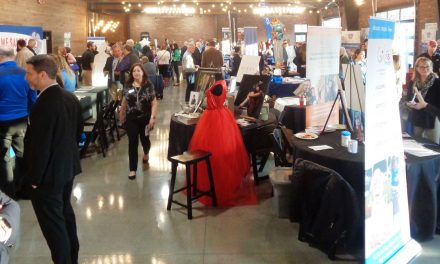 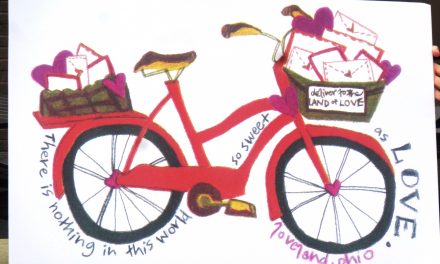 Unveiling the season of love in Loveland